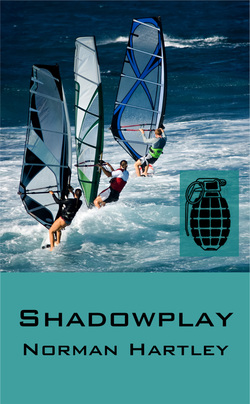 Set in the eighties, a classic thriller where journalism, espionage and sexual scandal collide.
​
John Railton is President of the prestigious World News Agency and he is in serious trouble.

He is fighting a bitter power struggle against Paul Sellinger, Chief Executive of the corporation with which his agency has just been merged.

While Sellinger tries to involve Railton in a sex scandal, the CIA targets him as a suspect when vital information is leaked to the Russians about a new missile project.

Railton runs the gauntlet of murder, sabotage and blackmail to clear his name, only to discover that the real spy may be one of the two women he still loves – his former mistress Seagull,  and Nancy, his ex-wife who is married to his deadly rival.


Shadowplay is a masterful combination of breathtaking pace and intricate characterisation, which moves from New York to London, via St Tropez and Rome.

‘A fascinating, fast-moving tale of espionage and sexual intrigue. Skilfully crafted.. a real page-turner.’
The Guardian

‘A thriller about love, betrayal and spying with the genuine nightmare touch,    set in the world of international journalism.’
The Times

‘What a superb novel! The concept is brilliant and frightening, the story-telling dazzling.’
Western Daily Press

‘Brilliant, tense and sinister…hard as nails in attitude and a real trip.’
​ The Scotsman

‘A racy read combined with plenty of excitement and insights into how spies and journalists live side by side.’
She magazine