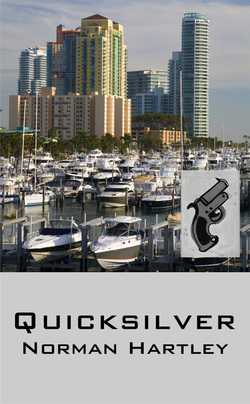 Set in the eighties, this is a classic thriller with a feminist ring which features the birth of cyber crime.

﻿Ex-SAS Major Peter Dallman is trying unsuccessfully to find peace in a Zen monastery when he receives an urgent request for help from an old friend, US Special Forces Colonel Jim Wolfe.

Wolfe is concerned about his daughter, a woman known as Silver, who appears to have thrown up a brilliant executive career to become the dazzling mistress of David Ransome, head of the Cybernel Computer Corporation, and one of America’s most powerful and unscrupulous magnates.

Dallman heads for the high society world of Palm Beach and is plunged into a nightmare of corporate infighting, sabotage and technology gone wild.

This taut, visceral thriller hurtles from crisis to crisis through Florida and Coney Island to end in a thrilling finale in New York.﻿

‘A fascinating insight into computer crime… a thrilling read﻿﻿.’
The Observer

‘Another winner from Norman Hartley. This time it’s computer crime in his sights. Can anyone feel safe?’
Philadelphia Bulletin

‘A fascinating and intelligent look at computer crime. Skilfully plotted with exciting twists and turns as the heroine struggles to expose corporate wrongdoing in Florida and New York.’
The Toronto Globe and Mail

‘Highlife, exotica and excitement.’
The Guardian

‘A beautiful computer expert caught in a vicious struggle between corporations. A heady mix of computer crime, violence and ingenious plotting.’
Houston Post

‘As  we  look  at  the  growing  computerization  of  our  society~  and  see  an equal  growth  in  the  variety  of  computer  crimes – is it  unreasonable  to  assume  that  gambits discussed  in  this  fictitious  account  are unlikely? Think  on  it… it's  hard  to  feel  very  secure  these days.’
ACM –  the world’s largest educational and scientific computing society.
​